Behind the decaying Ulster Arms between Greenwood and Coxwell Avenues, lies a neat few streets. Blocky houses, called “four squares” and post-War bungalows line Hertle and Highfield, making this enclave unique. Most of the houses in the surrounding neighbourhood are 25 to 30 years older, having been built between 1912 and 1930. But that is not all that makes this tidy corner of the East End special.

Before 1925 this was a brickyard, the Morley-Ashbridge brick pit. When the brickmakers had used up the clay they left a rectangular crater in the ground – a muddy crater with a creek running through it. Ashbridges Creek crossed Gerrard in a ravine and through the brickyard, providing the water needed to make the bricks. Joseph Russell sold the property. An investor purchased it but instead of building houses, he built a stadium – Ulster Stadium, the home of “the Red Handers”, formally known as “the Ulster United Football Club”.

On Friday, January 9, 1914,  a group of Irish Protestants, mostly members of the Orange Lodge, got together in the Occident Masonic Hall at Bathurst and Queen in Claretown to form a football club. The Ulster United began playing that season in the Toronto and District League and immediately won renown by winning the Third Division Champion in its maiden year. In 1915 it won the Second Division. In 1916 the Red Handers captured the championship of the Toronto Senior League.

Ulster United built their name by winning the Brigden Cup in 1916, 1917 and 1920. During that time, many Ulster men enlisted. Fiercely proud of their Irish Protestant Loyalist identity, Ulstermen formed a regiment that became known for its bravery in battle.

After the Great War, the Red Handers went on from success to success in football,  captured the championship of the Inter Cities League in 1921, 1922 and 1923. 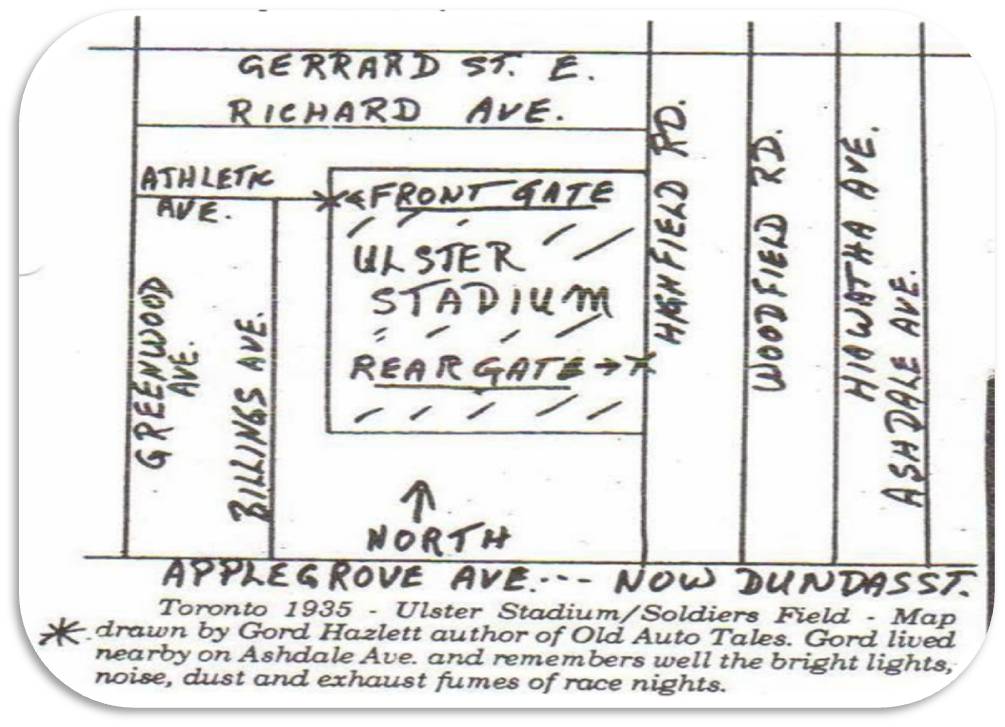 In 1925 they won the first of what would become three national championships. Their home field was the new Ulster Stadium. Here they played daytime matches and night games under floodlights against visiting teams, including the famous Glasgow Rangers. Ulster Arms was their clubhouse and not a tavern as it later became. Visiting teams could stay in the clubhouse which became known for its good food and good cheer. The home team streamed onto the field from a door in the basement of the Ulster Arms.

The steep concrete stairway at the east end of Athletic Avenue was the main pedestrian entrance to the Ulster Stadium. Bleachers lined the western side of the football pitch, utilizing the steep walls of the abandoned brickyard.

Who are the people in the picture?

These are my best guesses.

Racist comments like “those chattering magpies” referring to the Pullman Giants, an all-black team, were common. I think we’ve come a long way as a society since then, but not far enough by a long shot. 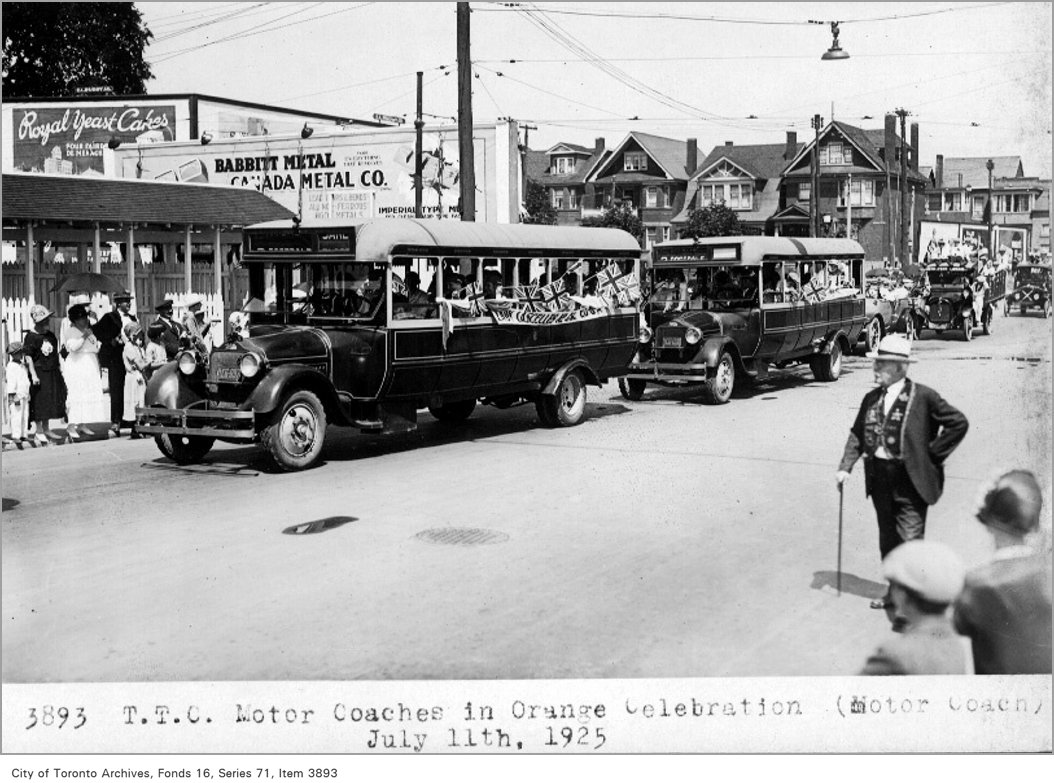 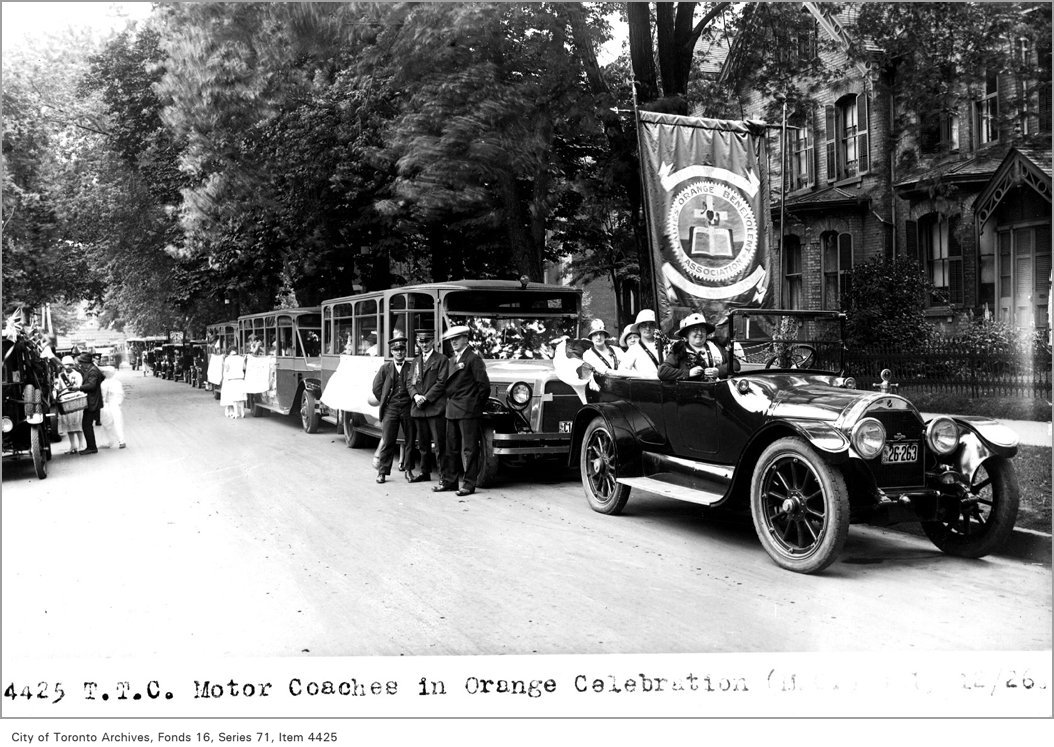 While its most well-known game was this one against Glasgow Rangers, Ulster faced other world-class teams such as Audax Italiano (Chile), Fortuna Dusseldorf, Kilmarnock, Liverpool, Manchester United and Sparta Prague. The members of the 1930/31 Ulster United included:

Close ups of the Ulster United team, From With the Glasgow Rangers in Ontario, 1930. 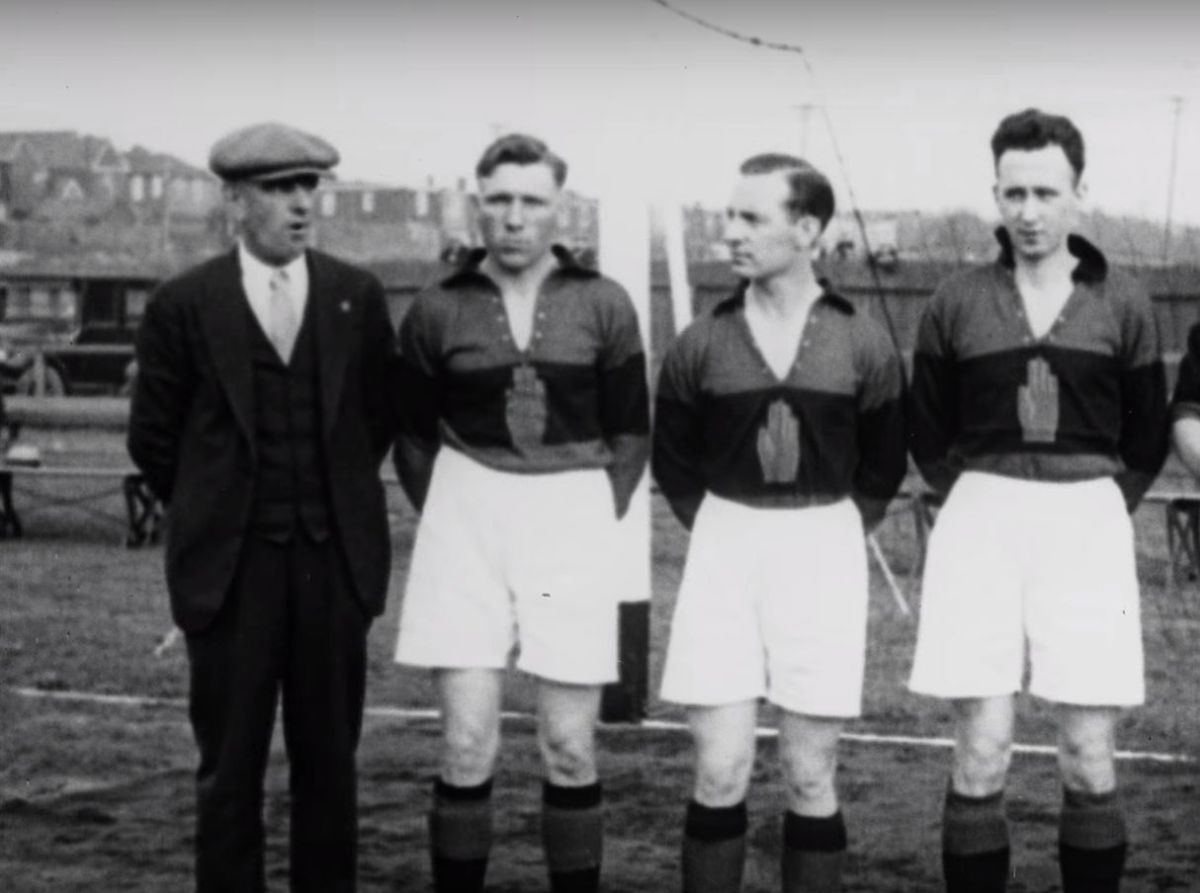 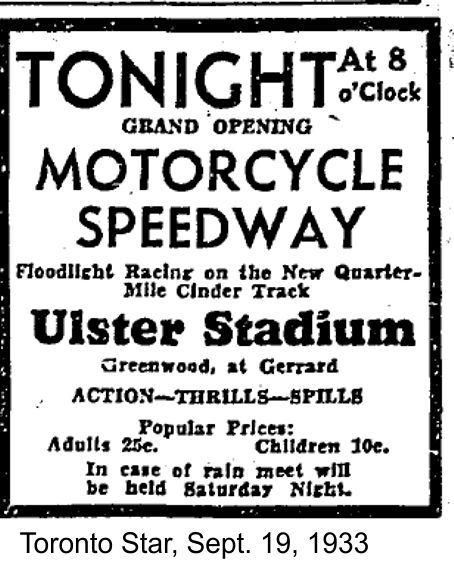 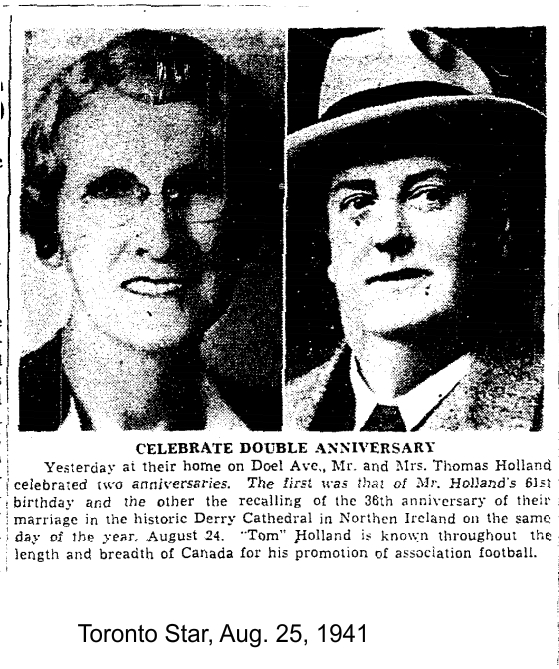 World War Two ended unemployment, but it made the housing crisis worse.  New houses filled the few remaining open spaces in The East End such as the grounds of the old Ulster Stadium south of Gerrard at the east end of Athletic Avenue. This was a well-known Toronto sporting stadium, where the local soccer club the Ulsters (known as “the Redhanders”) even played night games under floodlights against visiting teams such as the Glasgow Rangers. It was built in a former brickyard. Not far away, another The East End brickyard had hosted the site of the Motordrome, Canada’s first motorcycle raceway. It too became housing (Hiltz Avenue).  In the 1920s, Dunlop Field, south of Jones and Queen Street East, also became housing. 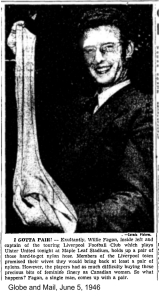 6 thoughts on “Ulster Stadium: Home of the Red Handers”