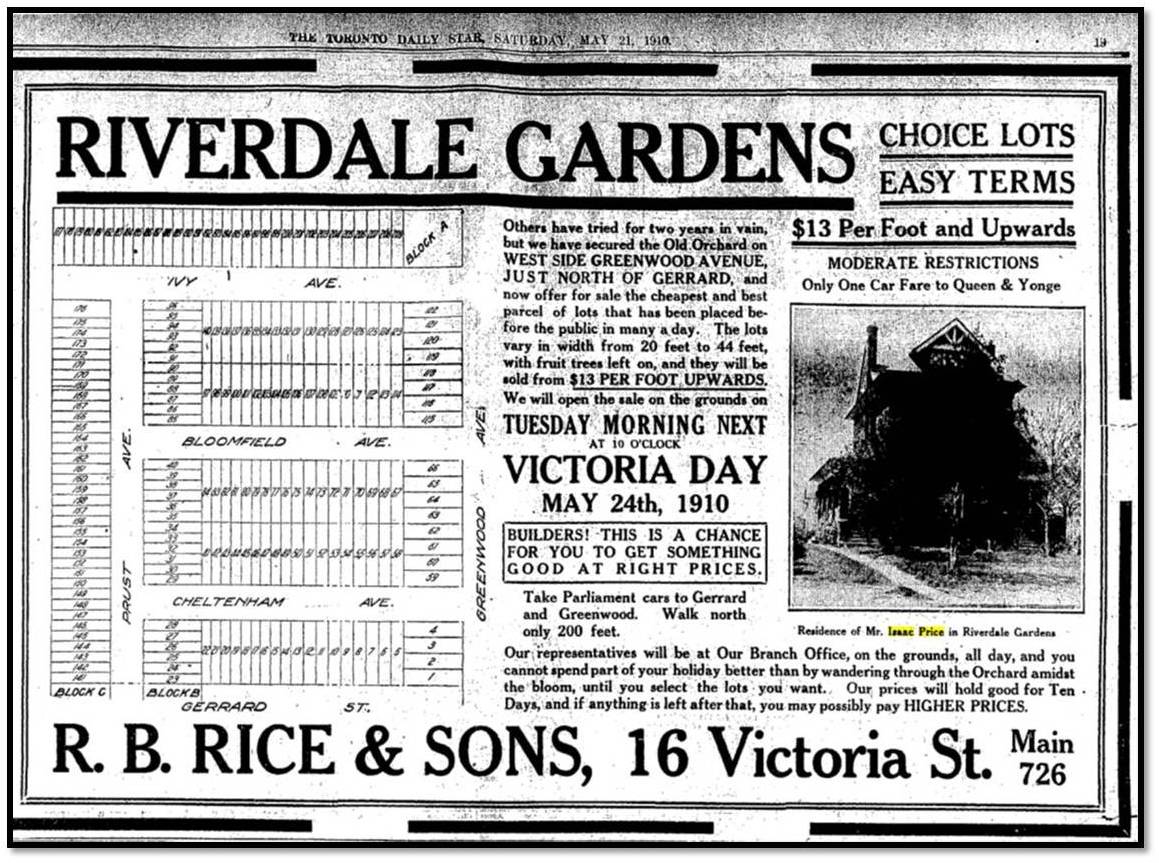 How did Ivy Avenue come to be the boundary between a kind of local heaven and a very local hell?  Well, it’s a long story, but I always like starting about 12,000 years ago — perhaps the local historian’s equivalent of “once upon a time”. In that long ago time, the ice from the last glacier melted leaving a deep cold lake called “Lake Iroquois” by geologists. It covered all of the area south of Taylor Creek. In time the lake itself disappeared leaving a much smaller Lake Ontario behind. But that’s not all that was left behind.

It left a hook-shaped sand and gravel bar (solid orange yellow on the map) that stretched from the Scarborough Bluffs west and north to just south of O’Connor Drive, diverting the Don River westward. It left behind a thick layer of sand (the yellow, speckled area on the map). It and the lakes before it left a deposit of clay, dark green, on the map, perfect for making bricks. This drew brickmakers to the older area of Leslieville around Curzon and Queen, but as the brickmakers used up the clay deposits they moved north and began to go deeper.

They dug deep pits in the land where the Wendat hunted and where the Seneca and other Haudenosaunee followed trails to the Burnt Lands along the Don River and the ford at the forks of the Don. The Anishnaabe came after 1700 and, according to local lore, camped near Ivy and Greenwood as late as the 19th century. Young British officer, John Graves Simcoe, fought the Americans in the War of Independence. After this war, the Loyalist Regiments were disbanded and ex-soldiers and political refugees poured northward into Ontario, beginning with 6,000 American settlers and about 1,000 Haudenosaunee, led by Joseph Brant. By 1790 there were 10,000 Loyalists in southern Ontario. To legalize, at least formally, the invasion and take-over of Mississauga land, Governor Dorchester, in 1787, arranged the Toronto Purchase.  Toronto cost 17,000 £ along with some barrels of cloth, some axes and other goods.  In 1805 Treaty confirmed Toronto Purchase, which was so flawed and duplicitous that it didn’t have the proverbial leg to stand on.

In 1792 the new Lieutenant Governor of Upper Canada, John Graves Simcoe, began turning over whole townships to the exclusive control of small groups of these colonizers in the hope of promoting rapid settlement. The Township of York East was laid out in long 200-acre strips running from Ashbridge’s Bay north past the 1st Concession Road to the 2nd

Concession Road, now Danforth Avenue.  The lots were number from east to west, beginning at the boundary with Scarborough Township, now Victoria Park. What is now Greenwood Avenue was the dividing line between Lots 9 and 10. Wagstaff Drive, Ivy, Bloomfield and Sandford lie on Lot 10.

Lot Ten was granted to John Matthews son of Thomas Elmes Matthews, born in 1767 in England. Thomas Matthews was a United Empire Loyalist who came with his wife Mary Rutan to Ontario. Large grants of lands were made to families like the Matthews. Often, as is in the case of Lot 10, they did not live on this land but held it in the hopes of selling it at a profit later. The Matthews family settled in Brougham in Pickering Township, near to where I grew up. Thomas Elmes Matthews died there in 1819. Mary outlived him for another 50 years. They had at least nine children.

The Committee beg leave to lay before Your Excellency a schedule of the Persons to whom farm lots have been ordered and to Recommend for Confirmation by Deed those to whom they find assignments have issued, and those who tho’ not under assignment they find either settled in the Vicinage of York or making some advance towards An improvement in their Respective Lots:

His brother, Peter Matthews, born in 1786 in Pickering Township (died April 12, 1838, Toronto at the age of 52 years). Another brother, mentioned in the minutes above, Thomas Matthews Jr., died fighting with the Brock volunteers at the Battle of Lundy’s Lane during the War of 1812. In 1823 John Matthews was riding his horse when a bear came out of the bush, spooking his mount. The horse threw him and John Matthews fractured his skull and died.

In 1817 the first usable road between York and Montreal was completed. Then weekly winter stage coach service began between York and Kingston and more settlers began to trickle along Kingston Road and open farms. Between 1836 and 1837 workmen straightened the Kingston Road to the alignment that modern-day Queen Street now follows. They “planked” the road surface with three inch thick pine boards, forming a roadway 16 feet wide, just in time for the Upper Canadian Rebellion. Pickering Township was a hotbed of radicalism. American settlers like the Matthews, though Loyalist, expected certain rights including the right to vote and the right to assemble freely. Peter Matthews and many others marched west along the Kingston Road into York to take part in the unsuccessful attempt to overthrow the established order and set up a more democratic form of government.

Samuel Lount and Peter Matthews were hung on April 12, 1838 in the front of the old Court House. The inscription on his monument in the Toronto Necropolis Cemetery states:

“Peter Matthews was the son of Captain Thomas Elms Matthews, a U.E. Loyalist who fought on the British side in the American Revolutionary War and at its close settled his wife and family in the Township of Pickering in the County of York. Peter Matthews, the son, belonged to the Brock Volunteers during the War of 1812 to 1815 and fought in various battles of that war. He was known and respected as an honest and prosperous farmer always ready to do his duty to his adopted country and died as he lived – a patriot.” – erected 1893.

While hundreds were hunted down and imprisoned during the winter of 1837-1838, only these two were hung in public for treason. The Matthews family lost much of the land granted to them and destroyed many family records to protect members who had taken part in the Rebellion.

George Leslie and his family moved to the area in the early 1840s, but growth was slow. The major industries of this rural area, brickmaking, abattoirs and market gardening were still in their infancy. There were only two  brickmakers listed in the 1851 Census for York Township: George Brockwell (1822-1866) and John Morley (c. 1821-1884). The brickyards would not spread north to straddle the rail line until 50 years later. The only houses on Lot 10 are clustered around the corner of Leslie and Danforth (now Donlands and Danforth) and along Queen Street.

In 1852 the Grand Trunk Railway was incorporated. It was built to form the main trunk line through the United Province of Canada.  In 1856 the Irish naavies who worked upon the railroad completed the line as far as the eastern bank of the Don River. That year the Grand Trunk (GTR) began running from Montreal to Toronto. The increasing ease of access to transportation encouraged more  more settlers to come the lands “over the Don” in Leslieville and Riverside. This detail from “Tremaine’s Map of the County of York Canada West, Compiled and Drawn by Geo. R. Tremaine from Actual Surveys” shows a Lot 10 that was subdivided into small lots for market gardeners and orchards. The sandy soil was good for root crops like potatoes, carrots, rutabagas and turnips while the area was ideal for apple orchards. The meandering Hastings Creek could be diverted into ditches to water more succulent plants like lettuce, tomatoes, cabbages, etc. and “small fruits” or berries such as raspberries or strawberries. 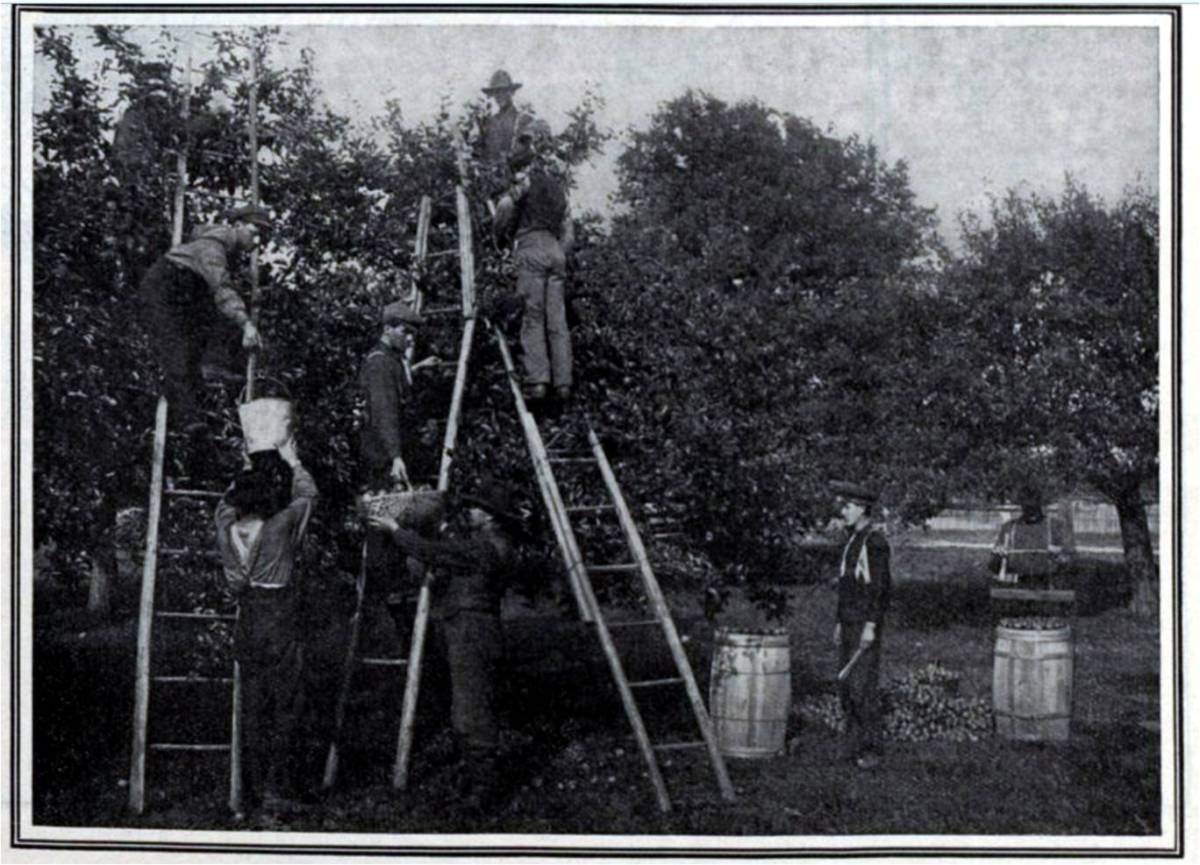 In 1868, the Fenians threatened to attack Canada and Gehle, Fawkes & Hassard’s “Reconnaissance Sketches of Toronto Area” was hand drawn to help military authorities prepare for the expected invasion. The mapmakers walked, carefully noting the what they saw, and translating it into a beautiful, but functional and accurate map.

In this map we can see the Greenwood family’s “Puritan Tavern” at Greenwood and Queen. North of it lay the first brickyards and kilns on Greenwood Avenue. The deposits of clay there were rich and burned created a rich red brick.

Where Ivy Avenue is now there was a farmhouse and “Nursery Grounds”, an orchard of fruit trees.  Another orchard lay north west of the railway tracks. Much of the area on the south slope of the hill was now covered with apple trees.

The next map is from the 1878 County Atlas and shows how Lots 9 and 10 have developed in just ten years.

In this map the names of the farmers are listed. At the top, on Danforth Avenue, was John M. Ross, a Scottish market gardener, and just to the south of him was Patrick Ryan, a Catholic Irishman. South of them James Richardson owned the land where the T.T.C. subway yard is today. South of the tracks were the Ryan, Smith, Norton, Cahill and Wallace orchards and market gardens. Frank and George Nicholson had a larger market garden just north of where Gerrard Street is now. South of Gerrard there was the large market garden of Patrick Mahoney, but south of his was John Russell, not a market gardener, but a brick manufacturer. Next to him were the Morleys, another family of brickmakers, and then more John Russell brick pit land and another Morley pit. John Elwood was also a brickmaker as was Walker Morley. Almost the whole stretch from Gerrard to Queen was now brickyards and clay quarries, except for the solid block of stores running on the north side of Queen Street, including the Puritan Tavern.

In 1884, the residents of Riverside and Leslieville voted in a referendum and, with their approval, the City of Toronto annexed the area from the Don to Greenwood Avenue. In 1887 the City annexed a strip of land 200 feet deep on the north side of Queen Street East all the way from just east of Greenwood Avenue to the Beach.

In 1890 the City of Toronto annexed a narrow north-south ribbon of land on the east side of Greenwood Avenue.  This small strip amounted to 35 acres. Redwood Avenue marks the eastern boundary of this strip. However, where Ivy Avenue was to later be was still very rural. That was to change and two very different men had a lot to do with that change.

On November 18, 1892 a young brickmaker named Albert Henry Wagstaff married Frances Gertrude Buckland  in Toronto, Ontario. Around the same time, William Prust was busy as a civil servant and builder in Haliburton — he was one of the founders of that settlement. These two men would shape Ivy Avenue: Wagstaff through his brick manufacturing business and Prust by laying out and building a subdivision called Riverdale Gardens along Ivy, Bloomfield, Sandford, Prust, the west side of Greenwood north of Gerrard and the north side of Gerrard from Prust to Greenwood.