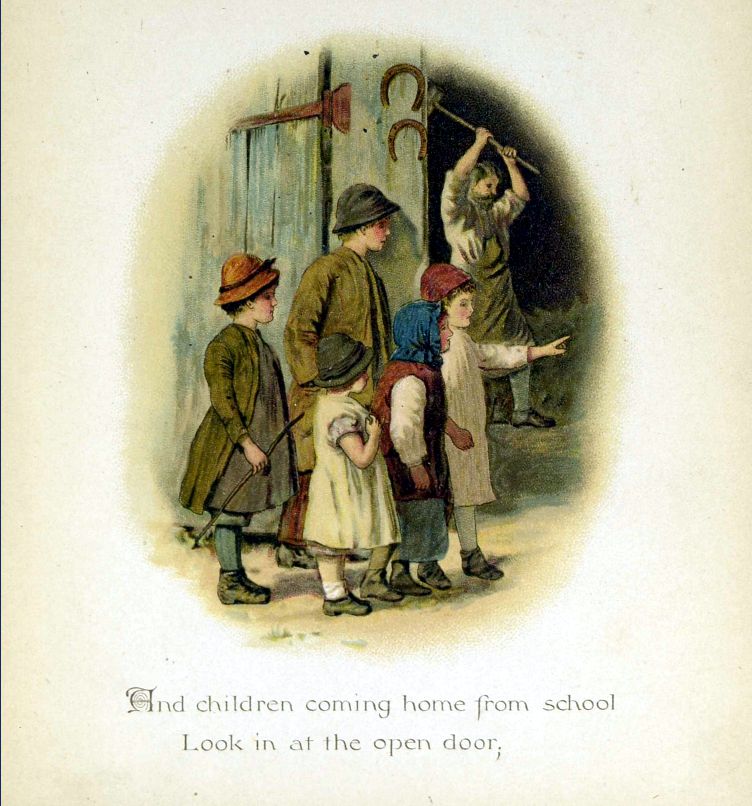 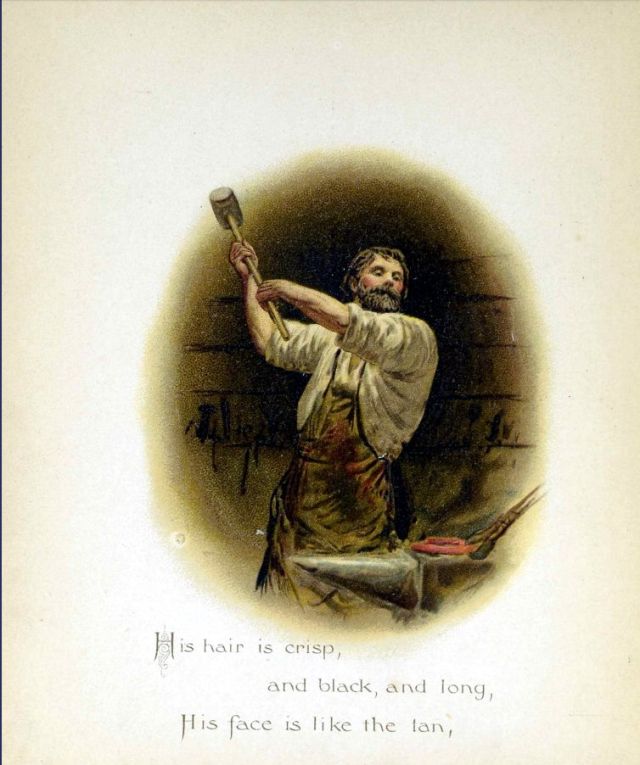 Illustration from Henry Wordsworth Longfellow, The Village Blacksmith. London: Castell Brothers, between 1888 and 1892? From The Toronto Public Library Digital Archives.

Now we will go from Grocery stores to Blacksmith shops and Saw Mills. 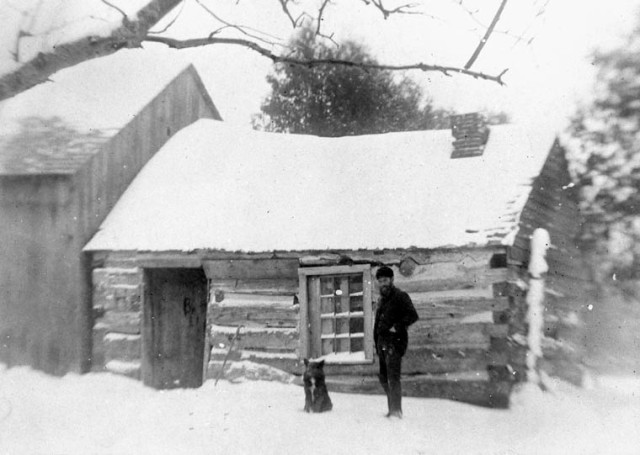 The postal village of Ashport (later called Leslieville) grew up around the tollbooth at Leslie Street and Queen Street East (then called the Kingston Road). Ashport had a steam saw mill, a cooperage (barrel-making shop), and, most importantly, a blacksmith and a tavern. The last two were the bare essentials of village life. There were very few brick stores before 1870 and most shops started as simple log cabins like this one.  This is the old blacksmith shop on Francis Ballantyne’s farm near Smith’s Fall’s, 1889-1916. The man in the picture is Elliott Ballantyne. Credit: Photograph is attributed to James Ballantyne/Library and Archives Canada/PA-127113

Blacksmith shops were still one of the industries in every community. 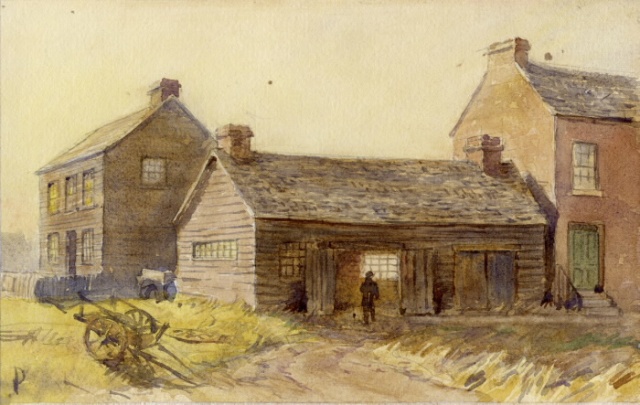 One of the first blacksmith shop’s in the east end was Bright’s at Broadview and Queen. Blacksmith’s were the “man caves” of the period where men could relax with a quiet tipple and pipe and tell yarns. George Leslie, a sociable man, liked to meet his friends in Bright’s blacksmith shop in Riverside. Globe, August 31, 1880 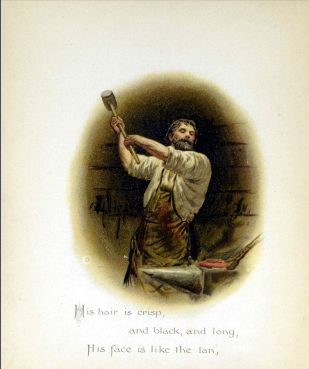 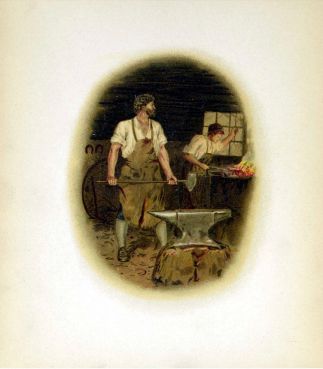 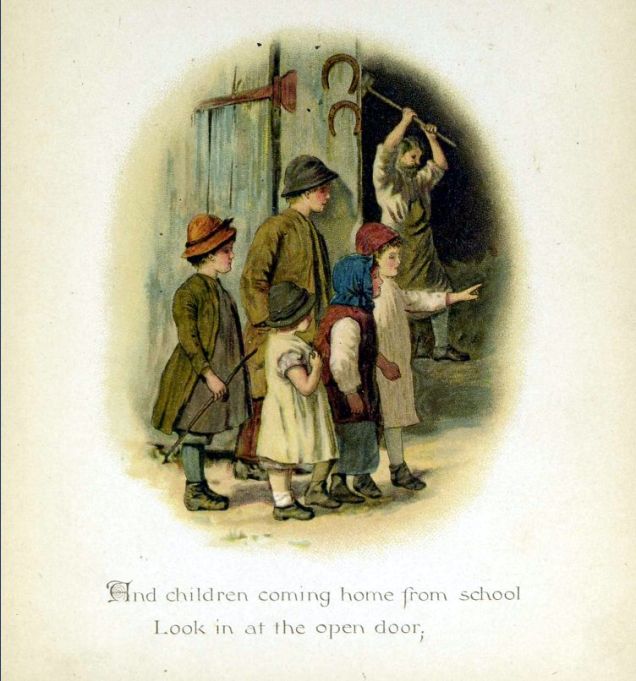 The toll booth was a place to stop to change horses, get something to eat or have a rest. So stage coach stops like Uncle Tom’s Cabin and later the Duke of York, were built along with stables for the horses.  Horse shoes needed replacement or repair so McLatchie’s blacksmith shop opened where Nash family had a garage for many years near Queen and Leslie. Many blacksmith shop’s became garages. Another is at Knox and Queen (southwest corner). Many garages later became strip malls since housing was rarely built on the sites due to the expense of re-mediating the soil beneath them. Globe, September 9, 1879 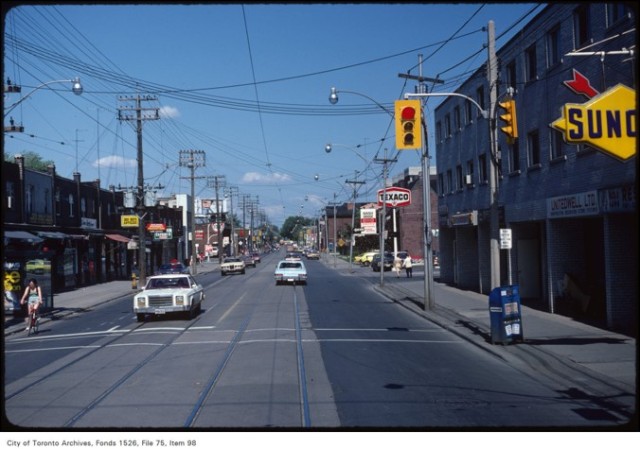 Queen Street looking east at Jones. Nash’s Garage was the Texaco Station on the right at the south-east corner of Queen and Rushbrooke. 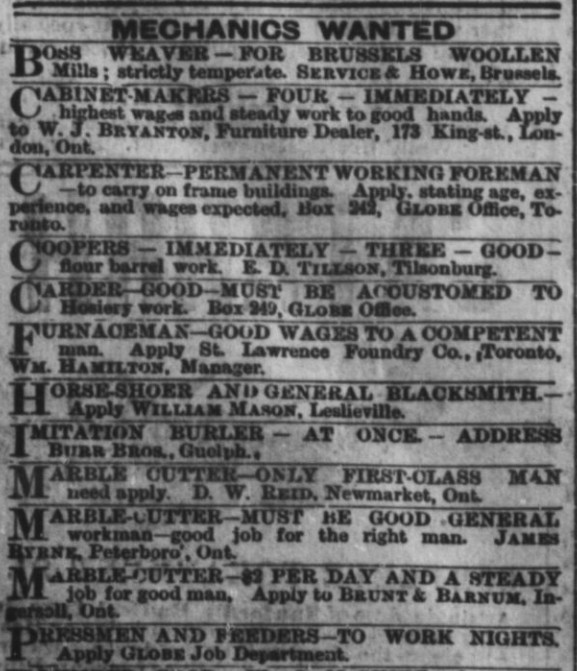 “Billy” Mason, an uncle of mine, had a well-established business just east of Logan Avenue on the north side of the Kingston Road. It was up-to-date in every particular. I used to visit it quite often, and can still recall the odour of a burning horse’s hoof as an almost red-hot shoe was fitted, then a little more hammering on the anvil, and then the shoe plunged in a half barrel of water to cool, and it was ready. A large bellows worked by hand kept the fire at any temperature required.

To see blacksmiths at work go to: https://www.youtube.com/watch?v=RYezhKql_AI 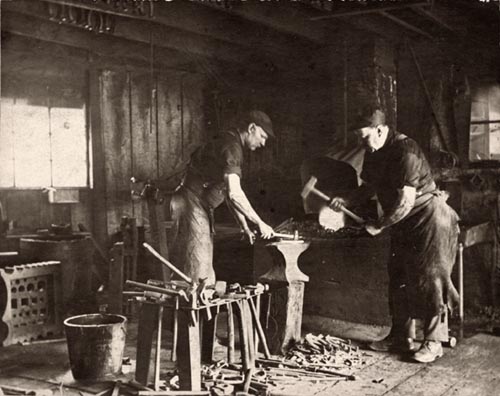 This forge would have been familiar to the author. Strange Street is just west of the CNR (GTR) tracks in Riverside — at the west end of Leslieville. Shoeing forge (blacksmith shop of Henry Worthing in Strange Street, Toronto) ca. 1905. Photo by John Lane. Archives of Ontario.

Morrison and Bolton had a blacksmith shop further east on the same side of the Kingston Road, just about where Boston Avenue is now. Mr. Morrison was a specialist on the very fine light shoes worn by racehorses and pacers, and in his spare time made fancy small picture frames, with these fine shoes. They were quite a novelty. 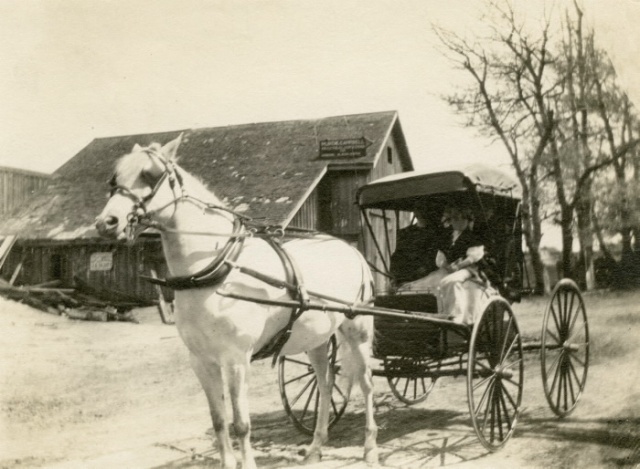 James Maunder had a blacksmith shop and waggon works on the south side of the Kingston Road near Leslie Street. The building is still standing though altered. 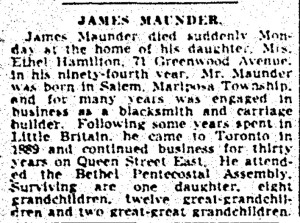 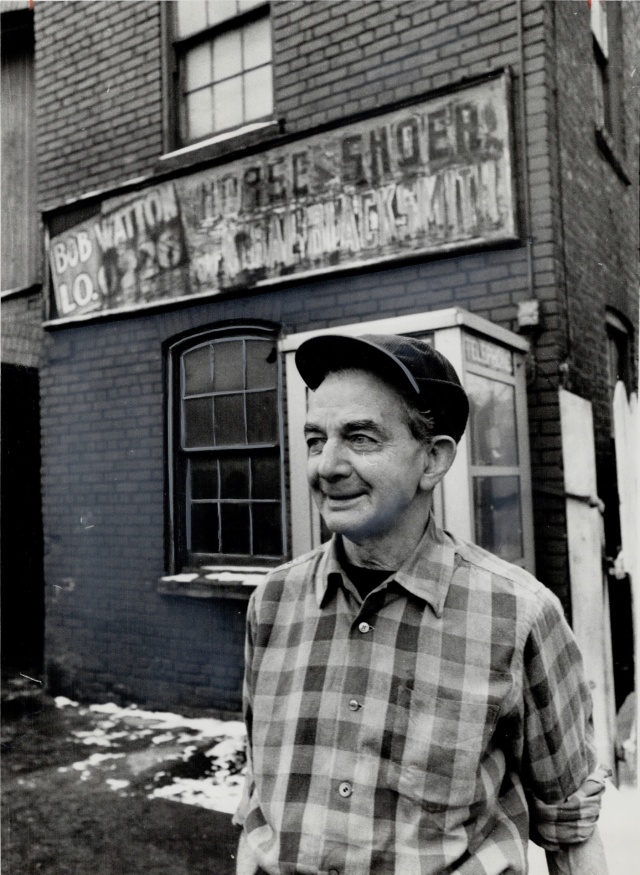 “One of the last blacksmiths in Toronto hasn’t shod a horse in seven years; but that suits 78-year-old Bob Watton just fine. I don’t miss horses a bit; he says.” Photo by Frank Teskey, 1970. Reproduced under a Toronto Star License. Credit: The Toronto Public Library Digital Archives.

Look for the next installment next week: Sawmills