1893 Barclay, Clark & Co. Bird’s Eye View Chromolithograph. Detail of Toronto’s East End showing the industrialization at the mouth of the Don and along Eastern Avenue. 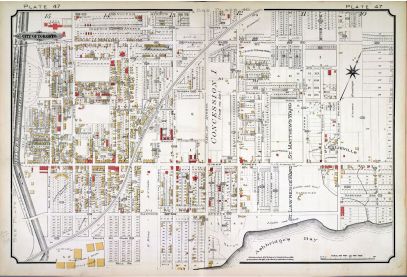 Now, going back to about 1885, after Leslieville was absorbed by the city, local improvements commenced.  Almost the first, was a sewer. Pape’s sideline must have been a corduroy road in its early because, because when preparing for the sewer, long logs were pulled out of the muck. They had been laid across the street, and were too waterlogged to burn. The men dug down to the solid blue clay for a good foundation. White brick was used in the construction and it was all man power. Later boys were paid thirty cents a day for keeping the workers supplied with barley water, and the same tin dipper was used by all.

Wages for the men was a dollar and a quarter a day. They worked from seven A.M. to six P.M.

With the sewer completed, the ditches on either side were levelled up a bit. ·Water mains were the next item on the list, and when we were connected with city water through a small hydrant outside our back door, and all one had to do was turn a key, and have all the water required—well, we were right in the lap of luxury. It is true, the blamed hydrant froze up in the severe cold weather, but hot water poured on it was the remedy. The next winter we found that by building a wooden frame around the hydrant with only the spout and key exposed to the weather, and the inside of the box packed with sawdust, that we had an almost frost-proof water supply. 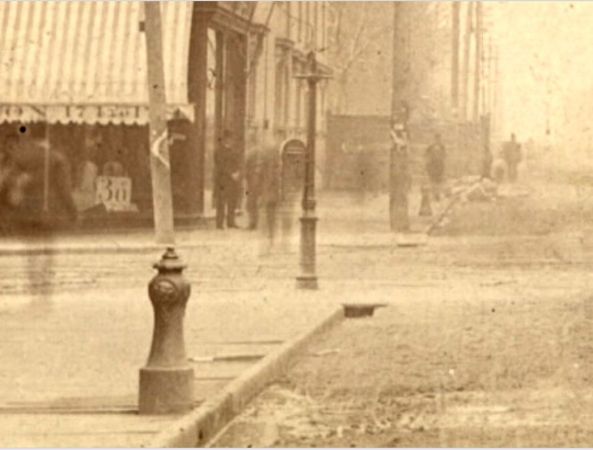 When the gas mains were laid it was a big improvement over the coal oil lamps that were in use, although more dangerous. One read every so often that so and so blew out the gas and a near tragedy was the result. Old habits die hard and it was easy to be forgetful and use the same method to extinguish the gas that had been used for the coal oil lamps.

With the advent of city water, cisterns, rain barrels, and wells gradually disappeared, although many still retained the rain barrel for the lovely soft water they had been used to for washing woolens, clothes, etc. If one had a rain barrel now, would it be safe to use the water, or what colour would it be, with the number of factories belching their acrid smoke and fumes all over the district. It is just as well that the down pipes from the roof lead direct to the sewer.

As new homes were built, bathrooms were installed, and older homes were modernized. No more cold trips to the outhouse in all kinds of weather, but I think many of the older people missed the outside shrine where they could sit in peace, quietness, and meditate.

Then with the march of progress, the streets were paved. Block paving was the method then in vogue. The road was levelled. Horses pulling a scraper over it until it was brought within about a foot of the level of the sidewalk. The roadbed was then pounded by groups of men, two men to a pounder, which was a heavy thick post of hardwood, with a handle going horizontal through the post, and another vertical handle on top, the men grasping the top handle to guide it, and with the other handle–one man on each side, they would lift the pounder about a foot or fifteen inches above the ground and then let it drop. 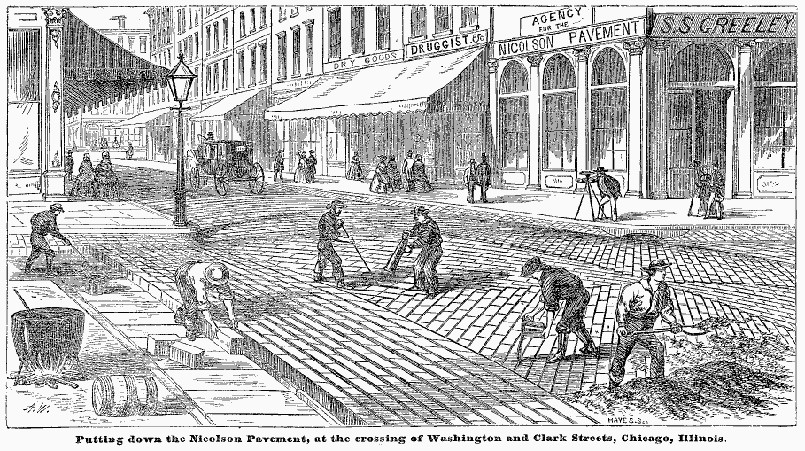 It was very effective, but hard work. After the road was pounded hard, gravel and sand was spread on it evenly, and this again pounded. Then the cedar blocks of various sizes, but all of uniform length were placed end up, and side by side, and again pounded. Then sharp sand was spread thickly over the top, and with the aid of push brooms, was worked into all the crevices until they were completely filled. Then a little more sand for good measure was spread on top, and with another pounding and levelling off, that portion of the road was ready for traffic.

This type of paving; worked fine for a while, but the sides of the road which were not used so much, soon began to fill up with grass and weeds due to the fertilizing effect of the washed down horse manure, and such like refuse. The centre of the road which was used the most soon began to wear down due to the sharp calks on the shoes of the horses. But the block pavement had its day and served its purpose well.

As the twentieth century dawned, people expected better and more from their City. In 1900 a typhoid epidemic swept Toronto. Finally the City had to take public health seriously. City Hall responded by building water filtration plants, using alum (aluminum) and chlorine to treat the water. In Leslieville people had welcomed amalgamation with Toronto, seeing it as progress. However, change was slower than expected. The East End’s main street, Queen Street East, was still a mess. In 1901 East Enders celebrated the paving of Queen Street East from the Don Bridge to the G.T.R. tracks: the boundary between Riverside and Leslieville. They gloried in the smooth asphalt, walking up and down on the asphalt all night, dancing and making merry. An old timer remembered driving oxen with a wooden cattle prod down the muddy trail that later became Queen Street East.

“Forty-nine years ago I drove down that street behind horned horses,” soliloquized Mr. James Hewitt, one of the early East Enders, as he gazed upon the gay scene last night. “My coachman walked—not because the walking was good, but because it was easier on the constitution that riding in those days, and it was fashionable then to operate oxen with a beech gad.”[1]

A man made regular rounds each day, and lowered the light to within four or five feet of the ground, and then standing on a low wooden stool loosened the burned-out carbons and threw them away, where they were eagerly grabbed up by the usual small boy who would be waiting. The carbons made very good thick black pencils.

The man would then hoist the light, or I should say, pull it up to the twenty-five or thirty feet to its position, and go on to the next one. I find the dictionary gives the following description of an arc light–“a sustained luminous glow or arc of light formed between two incandescent electrodes. To form an electric arc”.