It was a two-room brick building on a large lot, at the corner of Willow Street and Eastern Avenue. It faced Eastern Avenue, and as taken from a history of that time, it “was opened October 1, 1874.” For some time only one room was used.

Mr. F.G. Spence was the first principal. On February 15th, 1875, Mr. John Phillips took charge, and on January the 4th, 1884, Miss E. Williams took over the duties as principal.

Some extracts taken from the diary of Mr. F.S. Spence, the first Principal, are rather interesting. The first entry is dated October 1st, 1874, the day the school was opened. “The scholars suffered severely with cold. No stove being put up yet.”  Another a little later, “Monday October 12th, 1874, a very cold day and no stove being put up yet, the temperature in the school room was down to 47, and did not reach 54 all day. Closed school earlier on this occasion.” Another entry past the middle of the month is as follows, “Thursday, October 22nd, 1874, intensely cold, mercury stood at 40 this morning. Dismissed school at 11:30.” Then the last entry, short, but to the point.” Monday, October 26th: “Stove put up to-day. It is also noted that the winter of 1874-5 was one of the coldest on record. Snow covered the fences and cold prevailed all winter.

More interesting entries are from the diary of Mr. John Phillips, second Principal of Willow Street school. The first is as follows: “Greatest snowfall of the season, to-day, March 4th, 1875, all street cars behind time, it being almost impossible to get through the snow drifts. I was late for the first time this morning. Arrived at school at 9:20.” It may be noted that Mr. Phillips at that time lived on Bloor Street west of Bathurst St., and walked down to the corner of King and Bathurst Streets each morning in order to take a King Street car to the Don Bridge, and walked from there to the school, as there were no street cars at that time running east of the Don. All cars in the city were horse-drawn cars.

Just one more quote from the diary of Mr. Phillips dated August 17th, 1875.              “Opened the school again after the summer holidays, there were present 31 boys and 31 girls. Gave them a treat of nuts and raisins to encourage them for being on time for opening day.”

As said before, Willow Street School faced south, and almost in the centre of a large lot. Sheds were on the north side of the property, and these sheds provided protection for the scholars in stormy weather before the bell rang, and also was used for the storage of cordwood, used in the box stoves in the school. One section on each side of a tight board wall provided the necessary conveniences for the use of the scholars. On the boys’ side of this wall almost every square inch of space, and up as high as could be reached conveniently, were names, inscriptions, drawings, etc., cut, carved, engraved and other wise delineated, dealing with a variety of subjects.

The box stove in each school room was long and rather narrow, and capable of taking a good-sized stick of wood. One cold winter day someone, somehow, managed to sprinkle red pepper on top of the stove. As it burned, the fumes drove everyone outside. Doors and windows were opened, and the room thoroughly aired out before lessons could be resumed. A court of enquiry was held by the principal.  The strap was on his desk. Whoever did it, lied so convincingly that there was no conviction, but that particular type of joke was not tried again.  It was too risky.

When the new Morse Street School was opened in 1885, all scholars were transferred from the Willow Street School to the new school, and the bell from the old school was installed on the new one.       For many years it called the boys and girls of a later generation to their duties and studies.

St. Joseph’s Roman Catholic School came early to Leslieville, about 1863. The first school was a clapboard frame building on Curzon Street, a little north of Doel Avenue. It was mainly the work of Father Rooney, at that time priest of St. Paul’s Church. As a parish priest, he was extremely active in school matters, and for many years was Chairman of the Separate School Board.

At the time St. Joseph’s first school was built, separate schools were in their infancy and the means for their support were very limited.  The Priest of St. Paul’s had to support their country school in part, out of parochial funds, and in return they had the use of the school for mass each Sunday. He, or one of his assistants, regularly said mass in the school for the benefit of his people in Leslieville.

In 1871 Father McCann, successor to Father Rooney as Pastor of St. Paul’s replaced the frame school with a two-room brick building.  It was not an imposing structure, but it was pretty enough with yellow brick contrasted with the red. It was not a large school. One record gives the number as 35 girls and 25 boys.

In 1887, a Miss Ward was appointed to teach at a salary of three hundred dollars a year.

The first Parish Priest was Father McCarten O’Reilly, a husky popular Irishman. He soon proved himself the building type of priest, and on July 15th, 1886, St. Joseph’ s Church was officially opened.

I must tell you from personal recollection about Father O’Reilly’s annual picnic. It was held in the meadows, on the south side of Eastern Avenue, where a number of factories are now located, approximately between Leslie St. and about opposite Caroline Avenue, and adjoining the marsh and Ashbridges Bay. It was one of the events of the year in the east end.  It was a basket picnic and started in the afternoon. Tables were set out. Tea, Coffee, milk, cream soda and sarsaparilla were donated.  Races and games for the children in the afternoon, and then after supper the youngsters were either sent or taken home. (There were no autos or street cars to worry about.) Tables were cleared, and the odd keg of beer (donated) was tapped and the adult part of the picnic got under way. Fiddlers were on hand and provided the music for the dancing. Coal oil torches provided the light.  There was a darkened area outside the range of the lights where one could stroll if they did not care for dancing.  This was always an interesting section.

The picnic generally broke about midnight, weather permitting, and it could be safely said that “a good time was had by all.”

Father O’Reilly was an affable person with both young and old. On one occasion he stopped me on the street and said, “Well sonny and what is your name? I told him.  He then asked what school I attended. I said, “Willow Street.”  He replied, “Well now and that is fine, be a good boy and do what your teacher bids you”, then patted my head and walked on. This incident stands out very clearly in my memory. That was Father O’Reilly, beloved by all. 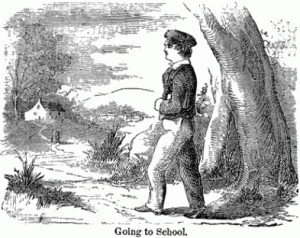 By 1855 Ashport (soon renamed “Leslie” or “Leslieville”) had its own public school and advertised for a teacher for their school house on the Kingston Road at Curzon Street:

Brutality was common in schools, but a York County teacher went too far even for the time, severely beating the son of a Catholic butcher, Terry Holland. George Leslie hired Alexander Muir to replace this violent teacher. Muir did not believe in corporal punishment and never strapped or beat a student.

St. Joseph Catholic School was first established in 1863 as a combined church/school on Doel Avenue, (now part of Dundas Street).  The same year the County of York built a new common or public school at Leslie Street and Sproatt to replace the earlier school at Curzon and Kingston Road (Queen St E). It was a log and clapboard one-room school. Muir became the principal, from 1863 to 1870, and moved to this new County of York school. 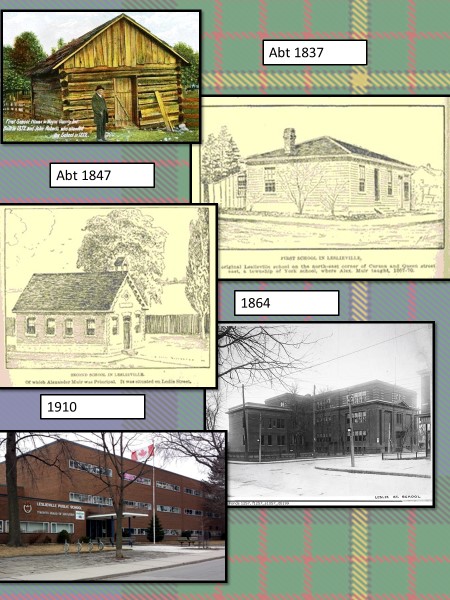 In 1871 a new two-room brick school (St. Joseph’s School) was built on the west end of a 55-foot lot running from Curzon Street to Leslie Street (just north of Dundas Street East) on the property owned by the Archdiocese of Toronto (just south of the playground of the Leslie Street Public School). This, the heart of Catholic Leslieville, was next to an abattoir and a piggery.  At first, priests held mass in the school. Priests, like Francis Rooney, came out from St. Paul’s Church on Power Street.

On September 17, 1873, The City of Toronto Public School Board began to search for a school site “at or near Leslieville” for inhabitants in eastern portion of St. Lawrence Ward which stretched all the way to the Beach south of Kingston Road (Queen Street East).

In February 1874 The City of Toronto Board selected a site “west of Messrs. Leslie & Sons Nursery” on the northeast corner of Eastern Avenue and Pape Avenue.  Aug 24: The two-room school was first called South Park Street School, but was soon officially named Leslieville School. The school was also sometimes referred to as Willow Street School, because it was at Willow Street and Eastern Avenue. Oct: Leslieville School opened. That year the log County #6 schoolhouse was replaced with a typical red brick one-room school house. The trustees enlarged the brick school over the years until in 1962 it was replaced by the current school on the same site.

By 1880 when Sam Herbert moved to Leslieville, there were three different schools and three different school boards looked after education in Leslieville: York County School No. 6 (now Leslie Street School), County of York School Board; St. Joseph’s School, Toronto Roman Catholic School Board; and Leslieville or Willow School (now Morse Street School), City of Toronto School Board. There were tensions between Roman Catholics and Protestants, adults and even school children. But, when bullies roughed up Father O’Reilly, even everyone was shocked. This was their local priest and no one in Leslieville would touch him.  It must have been strangers:

Father O’Reilly is deservedly respected in the neighbourhood by both Catholics and Protestants, and does not deserve such treatment. It is only fair to say the young men are not residents of Riverside.  Globe, June 5, 1882.

In 1883 the Leslieville (Willow School) school had 93 students and 2 teachers with an average of 47 students per teacher.  This school was considered overcrowded.

“The writer is informed by the City School Inspector that, on account of the great number of pupils in each class-room, the teachers have not fair play in their endeavour to teach and discipline their classes, and that on account of the want of accommodation, it is impossible for them to enforce the law as to compulsory education.” Toronto Board of Education Annual Report, 1883, 11.