The following article about Russell wrecks in Lake Ontario is from a blog “Here’s the Thing” https://webcache.googleusercontent.com/search?q=cache:LhvAwYMQ7ggJ:https://rutledgespics.com/blog/2017/04/02/+&cd=12&hl=en&ct=clnk&gl=ca

Not sure if this one has been relocated off Whitby Ontario

LOSS OF THE “W.R. TAYLOR.” — It was reported this afternoon that the schooner W.R. TAYLOR, owned by Mr. Leslie, and others, went ashore on the Manitou and became a total loss. It was only a few days since she cleared from Chicago with corn for Toronto at a very renumerative rate. The weather has evidently been very severe. The vessel is insured. The crew were composed of Kingstonians.
The W.R. TAYLOR was built at Picton in 1677 and owned by Messrs. Wilson, of Picton, and Lister, of Collins Bay. Her measure is 419 tons. She rates A 1 and is valued at $14,500.
LATER — Just previous to going to press we learned that the TAYLOR ran ashore near the South Minitores, (Manitous ?) which place she was making for shelter. The crew are saved, including the following: Captain, Simmons, Kingston; first-mate, Anthony LaRush, Wolfe Island; second-mate F. Thompson, Kingston; sea-man A. Felix, Kingston, brother-in-law of the President of the Sailors Union, Mr. C.W. Crowley.
Kingston Whig-Standard
November 24, 1880

THE TAYLOR ACCIDENT. — The schooner W.R. TAYLOR which went ashore at South Manitou, laden with corn for Toronto, has nine feet of water in the hold. Her cargo is a total loss, as the vessel will likely be. The vessel is insured for $13,000 on a valuation of $18,000, equally divided between the Orient, Greenwich and Manhattan Companies. The cargo consisted of 25,000 bushels of corn, shipped by Wm. Young & Co., and is insured for $12,000, equally dixided between the New England Mutual and Orient Mutual.
Kingston Whig-Standard
November 25, 1880

TAKEN OFF. — The schooner W.R. TAYLOR, ashore at the South Manitous, was successfully gotten off on Wednesday last, by the tug WINSLOW of Milwaukee. Two steam pumps were operated on the vessel. She will be towed to Milwaukee if possible. She is in fair condition. The expense of rescuing the vessel will be very large. There may be trouble regarding the matter as the owners had telegraphed to the Insurance Company that they had abandoned the vessel. The telegram was not received until after the expedition had set out.
Kingston Whig-Standard
December 10, 1880

Captain Martin Blackburn, the wrecking master, has made another excellent rescue. A dispatch from Glen haven, signed by Captain Blackburn, announces that the schooner W.R. TAYLOR is off and in the harbor at South Manitou. The corn cargo is of course a total loss, but the vessel is in fair shape. The tug WINSLOW did the pulling, and is now with the vessel.
The J.W. Hall Great Lakes Marine Scrapbook, November, 1880

The Canadian schooner W.R. TAYLOR that went ashore two years ago on the North Fox Island, lake Michigan, and was abandoned to the insurance companies and towed to this port, has been sold to Captain Henry Buckley for $4,500. She was pumped out and towed to the dry-dock today for repairs.
The J.W. Hall Great Lakes Marine Scrapbook, March/April, 1883 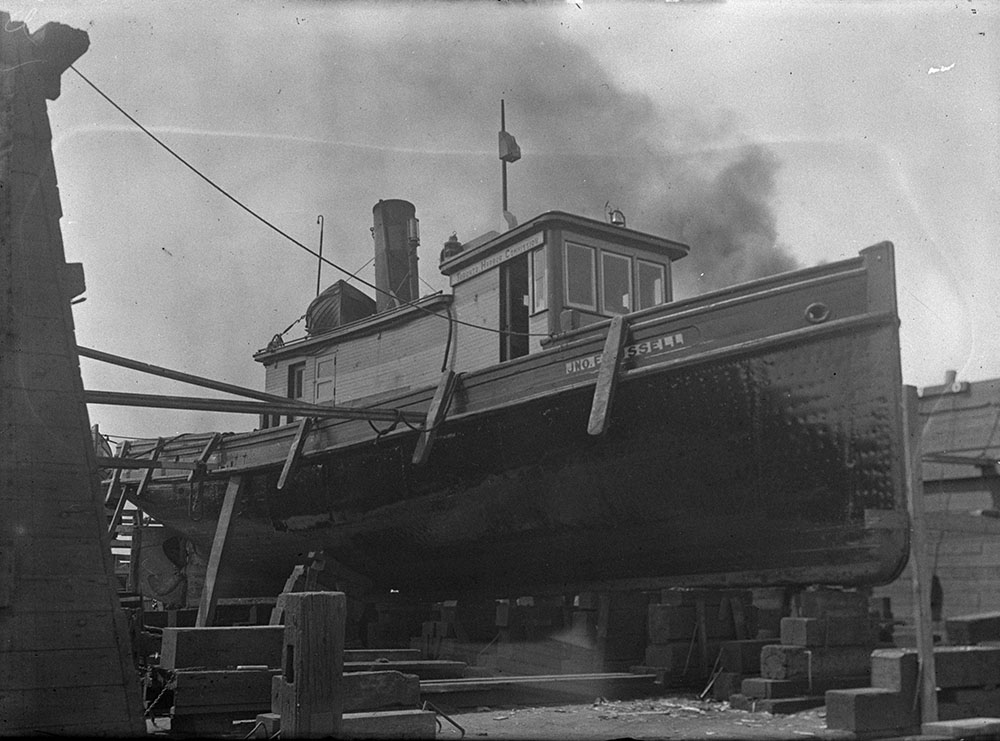 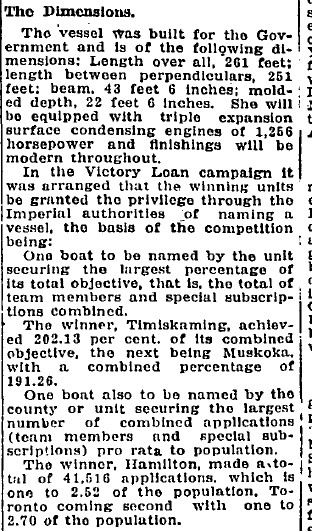 Seven Rescued From Flaming Gasoline Launch: Story from The Globe

Young Girl Heroine When Boat is Burned on Lake at Midnight: Story from The Toronto Star, June 15, 1931

Joe Russell, blue-eyed, good-natured and hard-working, changed the East End and the City of Toronto forever, as did his cousin John E. Russell. I will be posting more about Joe in the days to follow, but since there is a massive amount of material, it would be best to sort it a little and add some narrative to make it easier to digest and more interesting to read. So this is really a teaser and perhaps I should have saved it for his birthday — April Fool’s Day as he certainly enjoyed a joke.

Joseph Russell (1868 – 1925)  was a Toronto businessman and politician. He was the oldest son of John Russell, a brick maker and stone cutter.  Joseph Russell was from brickmaking clan like the Prices and the Morleys, only the Russells were Irish Anglicans. Joseph Russell was first cousin to John E. Russell who became famous as a salvage operator and contractor.

“Joe” Russell owned the brick works at 1308 Queen Street East at Alton Avenue. Russell provided much of the supplies used building the Toronto Railway Company’s paint shop in 1913. The Toronto Transportation Commission’s Russell Carhouse may be named after him. Joseph Russell was a candidate for the Ontario legislature in 1908 but was unsuccessful. Supporters then nominated him as an Independent candidate against incumbent Conservative MP Albert Edward Kemp, splitting the Conservative Party in Toronto East.

Kemp’s opponents accused him of neglecting constituents as well as hiring foreign workers (Macedonians and Italians) at poor pay to undercut Canadian workers. Russell won praise for offering rates of pay that allowed workers to “live in houses of their own, and not herd a dozen into a room.” Russell defeated Kemp by almost 800 votes in the 1908 federal election, but Kemp rebuilt the Conservative Party riding machine and defeated Russell three years later in the 1911 election. Russell returned to provincial politics, winning a seat in the 1914 provincial election. Russell served as the Conservative member for Riverdale from 1914 until 1918.

Joseph Russell and his sons’ families in the 1881 Canadian Census

This information comes from http://members.shaw.ca/davesfamily/__2jamesSmith.html A website that has been retired

I suspect he lived in the Simcoe area until about 1840, then moved to East York. (village of Norway)  I have reason to believe he might have been a tradesman in the early days (blacksmith, carpenter) but later became a farmer/innkeeper. There was a Thomas Smith, blacksmith, in the first census of Barrie in 1837 and his youngest daughter was born there.  The connection with Barrie is further strengthened since Thomas was living with his eldest daughter, Elizabeth Cundle, in Barrie in 1881.

During his childhood and youth, the family lived in Norway village, East York. They operated a store and pub on Kingston Road called the Norway House Hotel. James was also the road “toll keeper”. (Toronto’s Lost Villages, Ron Brown: p.99) After 1872 the family moved to Barrie where their last two children were born. In 1879, they moved to Emerson, Manitoba where James brother, Richard, operated a hotel. James and Ellen managed the Manchester House in Emerson during 1887-88-89 before taking the farm at Ridgeville.

Buried in Smith plot, lot 33, block 34
Ellen’s obituary says she died at age 92 which does not agree with gravestone. Also confusion over her birth date. Graveyard info from Judy suggests she and James had same birthday, but Carolyn Pelletier history suggest one given here.

Brickmakers hated the toll booths on Queen Street as they drove up the price of bricks on a road that was a morass of mud much of the year and certainly after a heavy load or two of bricks went over it. John Russell was an leader in his community, and, though a reserved man, he was what would be known as a community activist today.

18880418 GL Sale of Cooper property Gerrard and Pape to John Poucher ( a real estate agent) After George Leslie, John Russell was the largest landowner in Leslieville, but for different reasons. Leslie needed land to grow things on; Russell needed the land itself — the clay to make bricks. Perhaps like Leslie who had lived through the Highland Clearances, he, having lived through the Famine, was wary of leasing land from a landlord. Both bought as much land as they could, selling it off when they no longer needed. Both became rich men, the equivalent of millionaires today, not through their primary businesses, but through real estate deals like this. Russell bought the land where the LLBO is at Pape and Gerrard for $7,980 and sold it for $18,000. 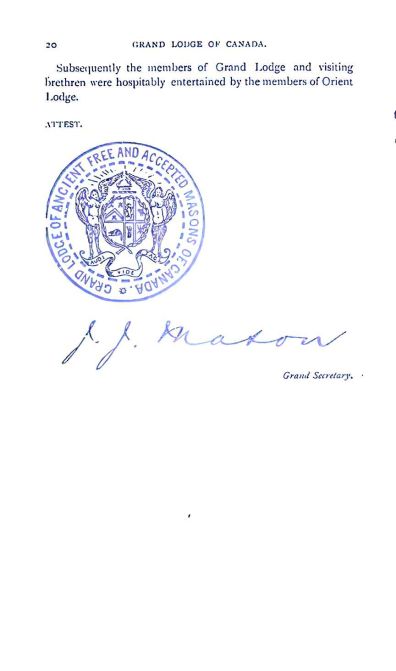 3 thoughts on “The Russell Family of Leslieville”