Did you know that an internationally award-winning vineyard perched on the east side of Coxwell Avenue north of Gerrard?

A small street, Casci Avenue, is the only reminder left on Coxwell Avenue, but the story is fascinating.

Vincenzo Giuseppe Casci was a sculptor. He was born October 17, 1828, in Barga, Lucca, Tuscany, Italy.

Arriving at about the same time as the Genoese were the plaster statuary vendors from Bagni di Lucca (Tuscany), and especially from the town of Barga. These boys and men, known as figurinai, had literally circled the globe peddling or casting statuettes in urban centres. They had plied their trade in London and Paris from at least the late eighteenth century. In 1821, twenty-three of these figurine makers were recorded in Paris alone, where they were often arrested for sedition for casting moulds of political figures. These men and boys usually travelled in groups of about ten under the direction of a contractor or boss, to whom the apprentices and vendors were apprenticed under two- or thee-year contracts. In each town or city visited by the band, the contractor kept a supply of plaster and other goods necessary for his trade. The figurine makers carried their own tools and plaster models. In that way the statuettes and medals were produced in each city and not carried from one locale to another.

When the period of apprenticeships ended, the young men set out on their own to test new markets. Some of them crossed the Atlantic Ocean and journeyed to cities and towns in North and South America. Vincent Casci and Harry Castrucci were among the early figurine makers and vendors in Toronto. Like other lucchesi, they made the statues from casts they carried with them, and sold them to the general public, although Casci, as a skilled sculptor, also produced statues for a number of churches.

Vincenzo Giuseppe Casci came as an immigrant to New York by ship, and travelled onward probably selling his wares as he went. Casci arrived in Philadelphia, April 15, 1851, on the ship Johanna which sailed from Livorno (Leghorn), Italy (86 km from Barga). The ship’s manifest lists him as a “marble statue” maker. He then went on to Toronto.

He was a Catholic, but, on December 16, 1861, at St. James Cathedral he married a German Lutheran Henrietta Carle Zink and the children were raised as Anglicans. Both Catholics and Protestant frowned on mixed marriage.

Casci worked as a sculptor, early advertising his skills with plaster of paris, selling small pieces on the street and making larger works for churches. In The Globe of June 21, 1862, he advertised “Plaster of Paris Manufacturer. All sorts of figures in groups, &c., Hat, Cap and Bonnet, Blocks, made and repaired. V. Casci, 193 Yong St. Cameron’s Block, Toronto, June 4.”

But his heart was in wine making, a challenge in Ontario then and now. He had his sculptor studio and shop downtown on King Street, but bought a piece of land near Coxwell and Upper Gerrard for a vineyard where he raised prize-winning grapes. Here he built a house that he called “Villa Casci”.

The contour lines show what an ideal situation this was for a vineyard. The steep south and west facing slopes of the ravine allowed many hours of sunlight to reach Casci’s treasured vines. A branch of Small’s Creek flowed through the ravine, providing clean cool water for irrigation. The east side of the ravine was steep — and still is. But the west side was gentler. Nevertheless, that western slope and the railway embankment sheltered the vineyard from harsh northwesterly winter winds, lengthening the growing season. As far as I can tell, Casci was the first European-Canadian to cultivate this soil so it would have had a thick layer of pine needles and rich soil on top of a sandy subsoil, allowing the drainage vines need to prevent their roots from rotting and fungi attacking the grapes. Nearby Lake Ontario also moderated the much colder climate of the 19th century. In the winter the lake acted as a giant hot water bottle (even though it was cold it was warmer than the land). So the north shore of Ashbridge’s Bay and the farms just north of it enjoyed warmer winters and longer growing seasons. In the summer, the lake acted as a giant refrigerator, cooling the area. Vincenzo Casci’s intelligence must have been as sparkling as some of his wines. He could see what no one else could see — not a patch of pine forest but a potential vineyard.

The wines he made won him acclaim and even mention in the British House of Commons and a place and the American Centennial Exhibition in Philadelphia in 1876. In 1876, according to the Sessional Papers of the Ontario Legislative Assembly, Vol. 9, Part 3, p. 167, Vincenzo Casci won a bronze medal at the great Centennial for his wine collection. On page 51, Sessional Papers, Legislature of the Province of Ontario, Vol. 3, p. 151, it says of Vincenzo Casci:

Mr. Casci has had great experience in the manufacture of wine, as he was formerly an overseer of several vineyards in Italy. All his wines are manufactured from the pure juice of the grape, without colouring or flavouring materials, and being pure and unadulterated, are strongly recommended for medicinal purposes.

V. Casci, Toronto, collection of Wines, chiefly for the “Grape Wine”, marked No. 6.

This is the one that won a Bronze Medal. He also exhibited a cherry wine (p. 99). In The Official Catalogue of the United States Centennial Committee, p. 45, it lists:

On January 8, 1885, Vincent died at the age of 56 from gangrene. Before the age of antibiotics, infected wounds, even small cuts, took many before their time. On his death certificate (January 8, 1885), Vincenzo’s occupation is listed as an “Image Maker”, a translation of figurinai.

His son Frederick William Casci (1873-1946) took over the property near Coxwell and Gerrard. He sued the City of Toronto when the City took part of the vineyard to widen Coxwell Avenue and built the railway overpass. (Toronto Star, Feb. 17, 1915) Fred Casci won $21,915 for that part of the Villa Casci lands expropriated to build the overpass. The arbitrator also award Casci the legal costs of the arbitration. (Globe, June 11, 1915). 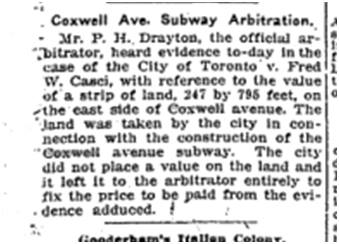 In the 1921 Might’s City Directory, Augustus Casci, a candy maker or “confectioner”, was living at 53 Hamilton Street. Frederick William Casci, a tanner with A.R. Clarke & Co., the glove manufacturer with a tannery on Eastern Avenue near Leslie St., was living on Eighth Avenue (presumably on the vineyard) with his family. Eighth Avenue no longer exists but according to this Directory it ran “North and east from Gerrard e to Woodbine Av, first east of Coxwell av, ward 8”. The Casci family were at #72.

There are Casci descendants in Toronto today. One of them still has the vineyard sign! So every time you walk by that strip mall at Upper Gerrard and Coxwell, throw your mind and imagination back to the days when the property was covered with grape vines and a large sign “Villa Casci” welcomed visitors to one of Toronto’s best men and some of the best wines. 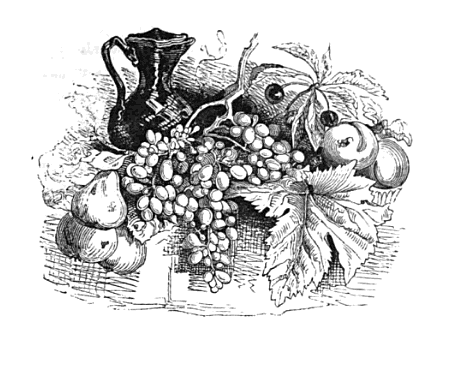 for more about the figurinai of Lucca and the surrounding villages in Tuscany go to: