Maybe not literally (yet), but with a little imagination, some good pictures, and a smidgen of narrative, the past can come alive. Use your imagination to go up Carlaw Avenue in the mid-1920s with the Leslieville Historical Society. 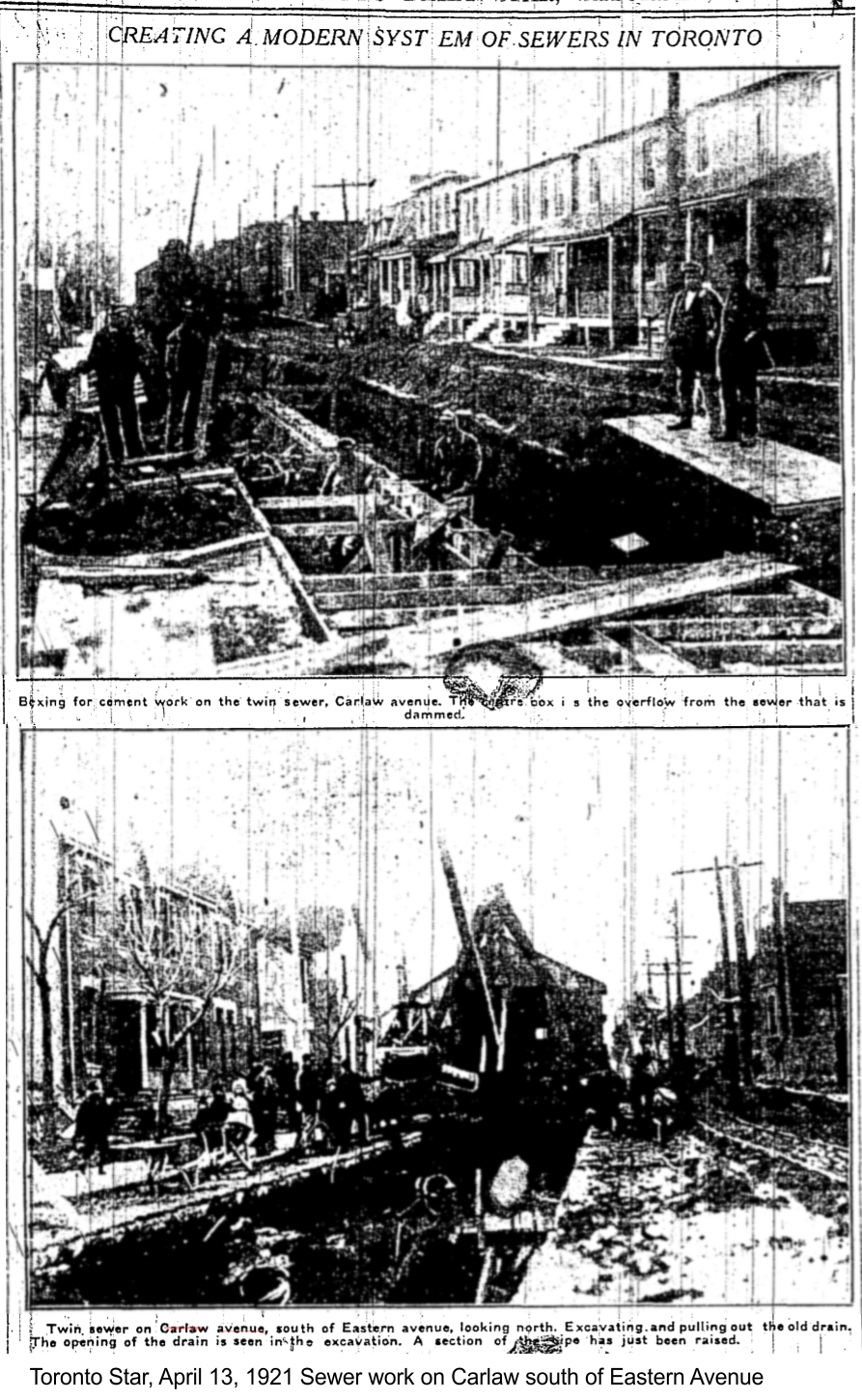 First stop, just south of Eastern Avenue on the shore of what is left of Ashbridges Bay. A wave of pure stink washes over you. Raw sewage in the water competes with the over-powering smells from Fuller Stanbury Co., pork packers and the penetrating stench of tallow renderers on your

right hand as you face north. At your left H. B. J

ohnston & Co.’s tannery reeks to high heaven. But that’s just one smell and we’ve just begun. Consumer’s Gas plants on Eastern Avenue near McGee are belching smoke into the air, as are dozens of factories.

Looking north from Eastern Avenue at the rail overpass into the industrial heart of Leslieville, wreathed in smog.

You hear the high-pitched squeal of frightened pigs as workers prod them down a chute from a box car at the railroad siding along Ashbridge’s Bay. Maybe it’s time to pick up the pace.

Walking is difficult as the street is in terrible shape, with deep ruts and potholes that seem bottomless. The new cement sidewalk is safer.

The streets are lined with small houses, some rundown, some even falling down. This is the poorest part of Leslieville. Some bear old Leslieville names like John Wise (not Wase) at #14, William Snook at #32 and Samuel Buckner at #136. But many more are immigrants who flooded into the neighbourhood just before World War One, drawn by the jobs in the factories and mills. Many houses hold two, three, even four families. Children are everywhere, their voices high and happy, as they play games of tag and hopscotch on the sidewalk. Boys hunch over marbles.

Rag and bone yards are tucked in among the tanneries, paint factories and slaughterhouses along Eastern Avenue. We call it recycling; they called it scavenging. It was work for the poorest of the poor, mostly new immigrants from the shtetls of Poland and the Ukraine.Samuel Cohen’s Veterans Rag and Waste at 101 Carlaw represents long hours of hauling goods by hand trucks and wagons from across downtown to the East End. Every grown up  who live in this crowded neighbourhood in the 1921 we are visiting knows what it was to work long hours.

I worked ten hours a day, six days a week. The only thing we could do because money was so low you couldn’t save anything or very little, so you had to work long hours to keep the table going.

But the rag pickers stand out in a world that was increasingly more and more dominated by one ethnic group.

And I think I should say that it was a WASP neighbourhood. As a matter of fact, I think it was Hughie Garner that said we were WASPO – White Anglo-Saxon Protestant Orangemen.

When I was a boy, very rarely you met anybody who wasn’t born here or Anglo-Saxon or whatever you call them.

Just north of Eastern Avenue, a small subsidiary of Dunlop Rubber produces Peerless heels and soles. There are many small plants scattered among the houses. People need to be able to walk to work. Their pay is not enough to support a family and pay for streetcar tickets. In another 80 years, the manufacturing plants will be gone and with them the blue-collar jobs that East Enders depended on. In the 1980s they would think of Carlaw as a ghost town of lost jobs and memories of days “on the shop floor”, where the sound of factory whistles carried above all the industrial noise and smoke from dozens of tall chimneys.

Smoke meant our men were working.

Most of the factories that were here when I was a boy are now out in the suburbs. The buildings are now usually warehouses and most of them are empty. 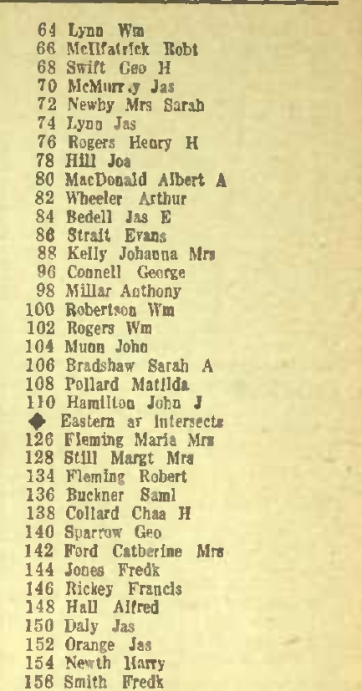